Sandbox and some of the Player-Created Games use Creative Mode, meaning they give all players Creator Cubes. This is one of the main game modes in Ylands. This mode removes the survival aspects of the game and allows players to easily create and destroy structures. 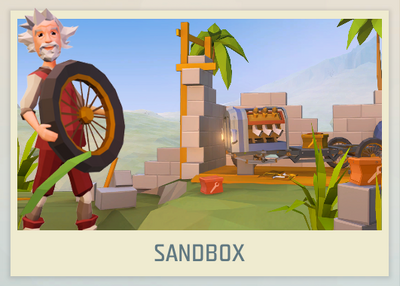 In Creative Mode, players are given infinite access to all of the items in the game through the Creator Cube. The player is not limited by Health, Temperature, or Hunger and so can build without the fear of being killed. Creative mode also allows players to destroy all items instantly through the use of the Annihilator, which is only available in this mode. Another tool only in Creative Mode is the Terraformer which allows the player to alter the Terrain. The player will be wearing the Power Helmet, Power Jacket, Pants, and Power Boots at the start of the Sandbox game. The player also has a lit Torch, Ylandium Lantern, and Paintgun.

Players in Creative Mode are unable to receive damage. However, if the player removes the Creator Cube from their accessory slot then they will receive damage, become hungry, and can die like in Exploration Mode. This, other than the use of the /killme command, is the only way to die in Creative Mode.

Unlike in Exploration Mode, only one yland is generated in Creative Mode. The player can choose any Biome for the yland but it will not spawn all of the Resources needed to complete the Tech Tree. However, these can be found in the Creator Cube. 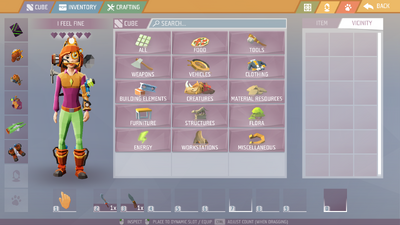 With the Creator Cube attached, the normal menu is given an additional Cube tab, which contains almost all blocks and items (with some exceptions). The player can press the 'TAB' key to open and close this menu.

Items can be dragged to the hotbar for an unlimited source of that particular item, items can be dropped, or the player can use the 'Take to inventory' button to acquire one stack of that item.